I have been selling real estate since 1971, and yes, I have experienced the Good, the Bad and the Ugly of changes in Mortgage Interest Rates throughout my real estate career.

Home buyers starting their home search at one interest rate, getting pre-approved at another rate, going under contract and submitting a mortgage application and locking in at another interest rate. And over the years, there were more instances that the interest rate was going up each time, not going down.

Home buyers today, and in the past couple years, have been fortunate. Mortgage interest rates have been very stable, and now they are at true Historic Interest Rate Levels below 3% for many Buyers.

Below is a Mortgage Amortization Chart. Calculate a payment at other rates. 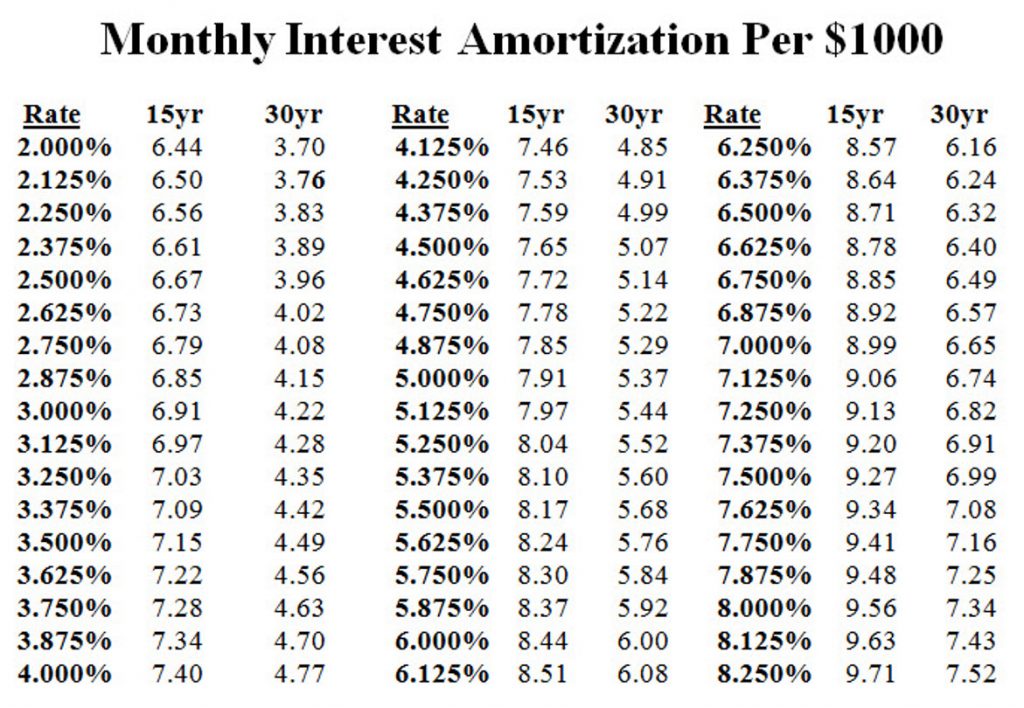 Money, July 21,2020
Brenda Richardson
How Low Are Mortgage Rates Right Now? Just Look at the Sky-High Numbers From the ’80s and ’90s

Traditionally, proposals and parenthood lead to home purchases. With interest rates below 3%, however, mortgage prices may join the list.

Economic uncertainty surrounding the coronavirus pandemic has driven mortgage rates to numerous record-lows since March. During the week ending July 16 average rates hit 2.98%, dropping below 3% for the first time. As a result, purchase applications are up 16% from a year ago and refinance applications are up 107%, according to the Mortgage Bankers Association.

“The record-low level of fixed-rate mortgage rates is good news for all home buyers, and particularly for first-time home buyers, many of whom have been renting in multifamily buildings and want to move to a single-family home during the pandemic,” said Frank Nothaft, chief economist for property analytics provider CoreLogic. “First-time home buyers have responded to the enhanced affordability of lower mortgage payments by stepping up purchases from a year ago.
Here’s a look back at rates through the decades.

In the early 1970s, surging energy prices amid an oil crisis fueled a new era in American inflation and the economy plunged into a severe recession. Mortgage rates soared as a result. When Paul Volcker took over the Federal Reserve in 1979, consumer inflation was running at an annual pace of about 9%. He pledged to make fighting inflation his top priority, telling lawmakers the Fed would “have to call the shots as we see them.” Volcker raised the Fed’s benchmark interest rate from 11% to a record 20% by late 1980, contributing to higher mortgage rates. Those high interest rates made it so expensive for people and companies to borrow that the economy weakened steadily. Nevertheless, the decade ended with the homeownership rate at 65.4%, about one percentage point higher than at the start of 1970, according to the U.S. Census Bureau.

In late 1980 and early 1981, the Fed once again tightened the money supply, allowing the federal funds rate to approach 20%. Subsequently, long-run interest rates continued to rise. This resulted in mortgage rates reaching an all time-high of 18.45% by 1981. The economy officially entered another recession in the third quarter of 1981 as high interest rates put pressure on sectors of the economy reliant on borrowing, including manufacturing, construction and home buying. U.S. monetary policy eased in 1982, helping lead to a resumption of economic growth. By October 1982, inflation had fallen to 5% and long-term interest rates began to decline. The homeownership rate dropped from 65.5% in 1980 to 63.8% in 1989.

The economy was in recession from July 1990 to March 1991, having suffered the savings and loan crisis in 1989 and a spike in gas prices as the result of the Gulf War. After that, the 1990s were characterized by strong economic growth, steady job creation, low inflation, rising productivity, economic boom and a surging stock market. The commercialization of the internet led to the greatest expansion of capital the country had ever witnessed. Mortgage rates, explains Hale, “stabilized around 10%, and then essentially started this long-term declining trend that we’ve seen from 1990 until now, with ups and downs for things that are going on in the economy such as expectations about future growth and the way the Fed is setting overall interest rates.” After sliding in the 1980s, the rate of homeownership increased to 66.9% in 1999 from 64% in 1990.

After years of considerable growth, the housing market fell into a deep decline beginning in 2006. A combination of favorable interest rates and relaxed standards for mortgage loans resulted in peak home prices. Home loans were accessible to borrowers who had low credit scores and a higher risk of defaulting on loans. These so-called subprime borrowers were allowed to take out adjustable-rate mortgages, which would start out with low monthly payments that would become much larger after a few years. When house prices peaked, mortgage refinancing and selling homes became a less viable means of settling mortgage debt. Mortgage loss rates began rising for lenders and investors. By the fall of 2008, borrowers were defaulting on subprime mortgages in high numbers, causing turmoil in the financial markets, the collapse of stock prices and the Great Recession. The homeownership rate declined to 67.2% in 2009 from 67.5% in 2000.

As the decade began, the market was battling to regain its footing in the wake of one of the largest housing downturns in U.S. history. Foreclosure filings were at a peak of 2.9 million. In an effort to rebuild trust in the financial system, the Dodd-Frank Wall Street Reform and Consumer Protection Act was passed in 2010 to protect consumers from the unfair and deceptive practices and products that led to the 2008 crisis.

In the vast majority of the country, home value appreciation accounted for most of the growth in the total value of the housing stock. The housing market added $11.3 trillion in value, a little more than a 50% increase in the 2010s. About 14% of that gain was from new housing stock, with the remainder from increased values of the existing stock. The homeownership rate decreased to 65.1% in 2019 from 66.5% in 2010.